From Sea to Shining Sea:
A Film Treatment by Paul Gasek and Gene Carl Feldman 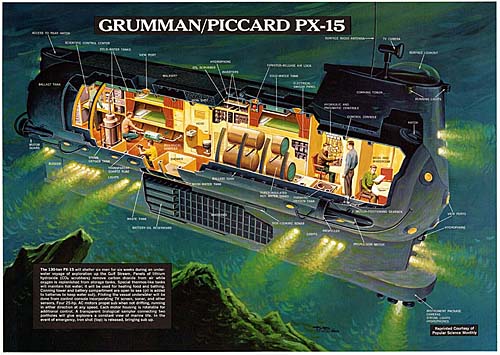 Timing is everything. In the summer of 1969, within one day of each other, two courageous crews set out to explore new frontiers. Both were NASA missions of pure discovery. One would go to the Sea of Tranquility, the other to the massive eastern boundary current known as the Gulf Stream.

One would completely obliterate the other in the world's awareness. For eight days in July, the world looked skyward, transfixed, as Apollo 11, with three astronauts aboard, rocketed to the Moon. No one noticed the launch of PX-15. Manned by six brave aquanauts, the mission of PX-15, in the mesoscaph Ben Franklin, endured a perilous 30 day, 1400 mile drift-dive deep in the Gulf Stream. Though regarded by NASA as an analogue to prolonged missions in space, it was little remarked and all but forgotten at the time.

While the world looked up toward the Moon as the Eagle tracked over the rugged terrain of the Moon and landed, the 50' Ben Franklin was drifting at 1200 feet, 40 feet off the bottom of the Continental Shelf, taking stereoscopic pictures of equally rugged terrain.

While the astronauts walked and worked on the Moon nearly 240,000 miles away, the aquanauts carried out their mission under crushing pressures between 800 and 2000 feet deep in the ocean. The danger to both missions and both crews was extreme, with little margin for error and very little hope of recovery in the event of an accident or emergency. Yet, one returned to the accolades of an adoring world, while the other returned to the notice of almost no one.

Within a few years, the frontiers explored by Apollo 11 and PX-15 were abandoned and a golden age of human exploration came to an end. Sending some- thing into the unknown has now largely replaced sending someone.

This is the story of two missions in parallel, similar in so many ways except in public awareness. In 52 minutes, "From Sea to Shining Sea" (registered with the Writers' Guild of America East (WGAE)) will track the parallel events of these two missions, weaving historic Moon mission footage from Apollo 11 news coverage with never-before-seen historic film footage from the PX-15/Ben Franklin mission to the Gulf Stream. The story of the forgotten mission of the Franklin will come to life as we tell the gripping tale for the first time.

"The coincidence of the Apollo 11 moon mission and the Ben Franklin Gulf Stream Mission in 1969 is a strange and rare historical event, one that involves two of my favorite subjects - space and ocean exploration. I believe it is fascinating topic and will prove to be an entertaining and illuminating exploration.

p.s. To celebrate the 35th anniversary of the Ben Franklin Gulf Stream Drift Mission, the Science Channel produced a documentary entitled Disappearance of the PX-15 based on the story described in the following pages.