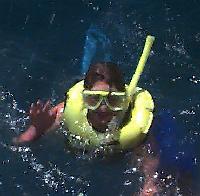 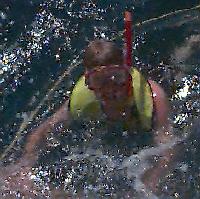 Today was the first day that we got to work out in the field. Our wake-up calls were at 6:30 and had to be at breakfast at 7:30. We started off the morning with a swim test, and scuba/snorkelling check-out. Next, the teo of us and Jude (our Teacher Argonaut) and I went out to the dive boat 'Magic', to meet our divemaster, Doug Kesling, and our Captain, David.

Once aboard, we jetted off to find a reef to dive. There was basically a choice of two reefs, 'Three Sisters' and 'The Mollasses' reef. We decided that since the conditions were both very similar, we would go to the deepest of the two, which turned out to be the Mollasses.

The water was nice and warm at about 82 degrees, but the waves all around us were pretty big! When we reached the bottom we were greeted by a large school of giant barracuda, which we then had to swim through! We then spent the next half hour moving along the sea floor. There were alot of different species of fish and corals. Many of them were the same as the ones in Bermuda, where I am from.

When we reached the surface we underwent the fun task of getting onto the boat in the waves, which we all managed with no probs. After we had stripped out of our wetsuits, I got the hose and rinsed myself off using all of the hot water available. Every last drop! Someone (I won't mention any names) got slightly sea sick and ended up feeding the fish!

We were back on the dock at about 4:30, and then got showered and changed. Next, we were taken over to the NURC headquarters to meet Ken Stbens who is going to be staying in the Aquarius, and his assistant Karla. When we were through with that Geoff, Jude and I got to go shopping. Well, kind of shopping -- we had to go get dive knives and I got a big dive watch. On the way back to the site, the brand rental new van (which had 7 miles on it to start) broke down. Sandy, who was driving us, pulled over and called for help. One of the JASON crew, Richard, came to our rescue and returned us safely to the hotel.

We arrived late to dinner. We were pretty tired and were looking forward to our beds. Unfortunately, instead of being sent to our rooms, we went to the Interactivity trailer, for what seemed like forever. I know when I got home I slept like a baby, and I'm sure everyone else did too!!!

Look for our entry tommorrow!
Leigh-Anne and Geoff

Back to April Expedition Journal